For the second and third hour pick any frequency. These are suggested http://zs6bne.wordpress.com/2013/03/06/radar-calling-frequencies/ . Post your frequency on  the RaDAR spotter page at http://www.cwfun.org/funspots/kx3/

Movement after every five contacts is encouraged. This will increase you points per QSO. See RaDAR Rally rules at http://radarrally.blogspot.com/2014/11/announcing-radar-rally.html

RaDAR is Rapid Deployment Amateur Radio. RaDAR Rally is active at all hours on 363 days a year. RaDAR Rally is open to all operators who operate portable. Credit is also given for fixed operators who chase RaDAR operators in the field. The other two days are RaDAR Challenge on the first Saturday of April and November.﻿
Posted by N4KGL at 4:15 AM No comments:

For the second hour pick any frequency. These are suggestedhttp://zs6bne.wordpress.com/2013/03/06/radar-calling-frequencies/. Post your frequency on the RaDAR spotter page athttp://www.cwfun.org/funspots/kx3/

RaDAR is Rapid Deployment Amateur Radio.See http://radarrally.blogspot.com/ for details on the RaDAR Rally Acheivement Program. RaDAR Rally is active at all hours on 363 days a year. The other two days are RaDAR Challenge on the first Saturday of April and November.

RaDAR has a spotter page now. See http://www.cwfun.org/funspots/kx3/ Please use it for RaDAR Rally or RaDAR Challenge. Thanks to Randy KB4QQJ who hosts the site. Don't worry about KX3 in the address that will be changed in the future.﻿
Posted by N4KGL at 6:06 AM No comments:

RaDAR Rally
The Rapid Deployment Amateur Radio RaDAR concept originated with South African amateur radio operators. The concept has evolved through the efforts of Eddie Leighton ZS6BNE over the years. Bi-Annual RaDAR Contests have been held on the first Saturday of April and November. Recently, Marcus Kessler NX5MK has sponsored RaDAR-America Contests held concurrently with the SARL RaDAR Contest. The RaDAR Contest rules have been further refined for 2015 and will be known as the RaDAR Challenge.


The Google+ RaDAR Community has attracted an international group of amateurs interested in RaDAR. The opportunities to practice RaDAR vary with the time zone and season of the year. Therefore to augment the bi-annual RaDAR Challenge the RaDAR Rally has been established. The Rally is an achievement program not a contest. Each operator may earn points for contacts made while deployed as portable. Portable stations can move a required distance by any means and redeploy for additional points per QSO. This movement is the essence of RaDAR. To assist the deployed RaDAR operators the Rally incorporates RaDAR Chasers who earn points contacting the deployed RaDAR operators. The points for RaDAR Operators and Chasers are combined toward claiming tokens. The period to claim tokens is over a six month period. Each six month period will have a new set of token. The RaDAR Rally is now in effect as of November 11th 2014.

The RaDAR “Rally” is a unique program aimed at promoting the use of Rapidly Deployable Amateur Radio stations.  The points system is so structured as to encourage portable RaDAR operations, especially moveable RaDAR stations. RaDAR stations in the field are challenged to make contacts with limited power and compromise antennas. Therefore, the Rally also encourages other fixed amateur stations "chasers" to contact RaDAR operators in the field.

All amateur bands are allowed including cross band contacts via amateur radio satellites. Modes – CW, SSB, AM, FM or any legal digital mode. QSOs via terrestrial repeaters will NOT be allowed.

See https://zs6bne.wordpress. for the latest international list of frequencies. The WARC bands can be used considering this is a RaDAR “Rally” and not a contest as such. It provides better opportunities for RaDAR contacts during difficult propagation conditions.

Call sign, Name, RS(T) Report, QTH and location grid locater.  The grid locater of six characters is acceptable but should preferably be accurate to 10 characters for higher position accuracy.

Aeronautical mobile stations are considered moving stations and can communicate at any convenient time.

Note: Moving RaDAR stations can move at any time but are required to move to the next destination after five contacts have been made from the present location. The move needs to cover the required distance before further contacts are allowed to be made. This requirement tests the ability to rapidly re-deploy your amateur radio field station.

5 Points (The equivalent of five QSO’s) for a minimum of one satellite or any digital modes QSO involving a computer, smartphone or digital modes device. (For clarity thereafter 1 point per Satellite / Digital modes QSO). RaDAR Chasers can claim this bonus only for a QSO with a deployed RaDAR station.

5 Points for the first successful same continent RaDAR to RaDAR QSO (As may be confirmed by the extensive information exchange).

10 Points for the first successful inter-continental (DX) RaDAR to RaDAR QSO (As may be confirmed by the extensive information exchange).
These bonuses are available once per Rally for RaDAR Chasers. They are available to RaDAR Operators once per operating period which is 8 hours.

The  RaDAR Rally manager is Greg Lane, N4KGL. Send email logs to lanekg (at) gmail.com. Logs can be submitted any time a token is requested. Only the logs since the last token are needed. Greg N4KGL will submit his logs to Eddie ZS6BNE for confirmation.

Chaser and operator points will be combined.


The participants who who submit logs supporting their scores will have their token status posted by the program manager to the Google+ RaDAR community and other web sites.

On-line participation on the Google+ community is encouraged but not required. Posts and photos related to your planned operations, live operations and post operation reports are encouraged. 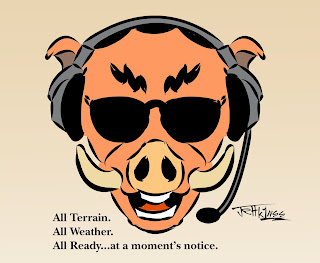